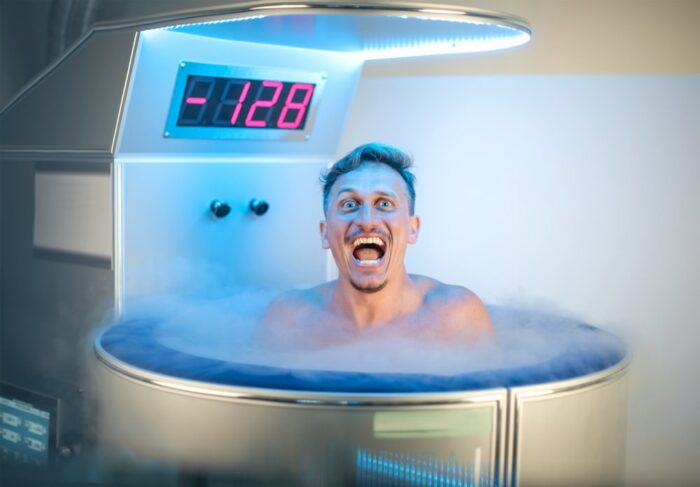 The physical effort that professional athletes are exposed to today is incomparably greater than just 20 years ago, not to mention 50 years ago. Once fitness level of professional athletes was only slightly better compared to amateur athletes, and today athletes need to be strong, fast and to have endurance as elite military special forces.

And that is the situation no matter which sport we are talking about. Same situation is in the NFL, NBA, tennis, F1 or some other sport that seems less strenuous, such as baseball. In order to be able to withstand the intensity of matches, as well as the huge number of matches during each season, it is not enough just to practice regularly. A perfectly balanced diet is also necessary, as well as various recovery methods. Ice bath is one of the methods that has been around for a long time as well as massage, yoga, acupuncture and other recovery techniques. But one recovery method in particular has come under spotlight in recent years – cryotherapy. More and more high profile athletes use cryochamber. We will tell you which athletes use cryotherapy and we will also discuss benefits of it in this article.

Famous athletes who use cryotherapy

Different forms of cold therapy have been present for thousands of years, because the benefits have always been known for relieving pain and many other things that we will talk about later. In 1978, in Japan, Dr. Yamaguchi began to apply something very similar to cryotherapy as we know it today.

During the 90s and 00s, a large number of pro athletes began to use cryotherapy as an integral part of recovery after training and matches. And over the last decade, at least 80% of athletes have entered the cryochamber occasionally, if that is not part of their regular recovery routine. That is why it is impossible to mention everyone who uses it, so we will mention some of the most famous. A large number of tennis players use cold therapy, so many major tournaments like Roland Garros have bought a cryochamber to allow players to begin recovery immediately after a match, while still in the complex. Rafael Nadal, one of the greatest of all time, spoke about how much cryotherapy helps him reduce the number of injuries and overcome some of the many injuries he had in his career. Speaking of other sports, Usain Bolt, the fastest man ever also takes advantage of this therapy. High profile soccer players like Cristiano Ronaldo say cryotherapy has extended their careers. Also, entire NBA teams including the LA Lakers and Dallas Mavericks are advocates of cryotherapy. NFL players are in pain after every match due to the nature of the sport, so ice bath and cryotherapy are common. We could mention tens and hundreds of other athletes, but this is enough to understand that the best of the best cannot imagine their recovery process without cold therapy.

Cryotherapy experts behind adriameduae.com told us cryotherapy can do more for you in 3 minutes than an ice bath can in 1 hour. And a lot of researches are backing that claim. Of course, cryotherapy is incomparably more expensive than ice bath, so ice bath is still used, especially at home, because buying a cryochamber for home use does not make sense. We will tell you the main benefits of cryotherapy, both for pro athletes and for all people.

These are exactly the reasons why most professional athletes cannot imagine their recovery routine without cryotherapy. As you know, ice was always put on the injured place. Entering the cryochamber is a thousand times more effective than that and helps muscles and other tissues heal faster, and also reduces pain. And not just pain from sports injuries, but also from conditions such as arthritis. Reducing inflammation is equally important, as chronic inflammation of tendons and ligaments can lead to some of the most severe injuries, such as the Achilles tear or ACL tear. Also, chronic inflammation of other tissues is conducive to the development of cancer and other very serious diseases.

There is no magic solution for excess weight, so one should not expect that cryotherapy will make tens of kilograms disappear in a day. Still, it can help. When the body is cold, the metabolism has to work much faster and then it burns more calories. And it is known that calorie deficit is necessary for weight loss. Also, it indirectly helps by allowing you to recover faster, and then you will be able to run more often or do some other activity that is good for weight loss.

Many who have this chronic inflammatory skin condition have said that cryotherapy has significantly reduced their problem. However, care must be taken as frostbites may occur.

Localized, targeted cryotherapy is used to treat low-risk tumors. In this way, the tumor cells are frozen and surrounded by ice crystals so that they cannot multiply.

Migraine is the most common type of headache that affects a huge number of people on the planet. Many have other symptoms in addition to headaches, such as blurred vision. Cryotherapy has been shown to reduce symptoms, especially headaches, although it is not possible to completely cure migraines.

As you can see, cryotherapy has so many positive effects on our body, that everyone should use it. Ice bath as a more primitive form of cold therapy is also useful, but nowhere near as cryotherapy, and the reasons are many. That cryotherapy is a far superior option, as well as completely safe, which you can understand from the fact that cryotherapy is used by the world’s most famous athletes who are paying so much attention to their health. While ice bath is mostly for high school football teams and others who do not have the financial means to buy a cryochamber. But ordinary people have access to clinics where they can use cryochambers at affordable prices and thus implement this advanced method into their recovery routine.